In this article, we are going to compare two powerhouse laptops – Lenovo ThinkPad P1 and the X1 Extreme.

Both laptops may look the same but they serve different purposes. Here’s everything you need to know about Lenovo ThinkPad P1 vs X1 Extreme.

Differences Between P1 And X1 Extreme

The Lenovo ThinkPad P1 and X1 Extreme have similar hardware configurations. The differences come about in the processor, graphics card and storage.

Aside from those three, the rest of the hardware configuration is similar. If not the same.

There is no difference in design and build quality between the P1 and X1 Extreme.

Except for one thing. X1 Extreme has X1 written on the bottom-right corner of the display lid. The Lenovo P1 doesn’t have this.

Put them side by side and you will have a difficult time telling them apart. The ThinkPad logo is found at the same location – top-left corner on the display lid and bottom-right corner on the keyboard deck.

Their chassis has a black soft-touch finish and the display lid is covered by carbon fibre. Unfortunately, both attract smudges and fingerprints like crazy. And at the same time difficult to clean.

When it comes to build quality. The P1 and X1 Extreme are made from the same material. Magnesium alloy that passes the MIL-STD tests for durability and resistance to drops and falls.

Because of its solid build quality. The flex and warping are almost non-existent on the display lid and keyboard area.

The weight is dependent on the hardware configuration. It can be a few hundred grams lighter or heavier.

When it comes to the port selection. The type and number of ports on the P1 are the same as the X1 Extreme.

Aside from the X1 logo written on the Lenovo ThinkPad X1 Extreme. There is no difference in design and build quality between them.

Getting into both laptops is easy. Remove all the screws on the back and you have access to the internal components.

You might think the similarities end at the design and build quality. But, it continues to the motherboard.

Both have the same motherboard design. And this is great. Because you can upgrade some internal components.

You have two RAM slots that can be upgraded up to 64GB (32GB each). The Wi-Fi card is also replaceable or upgradeable.

Regrettably, the X1 Extreme can take up to 2TB SSD storage. Still, it is a lot of storage for a lot of people.

The P1 and X1 Extreme both employ the same cooling solution. Two fans and two shared heat pipes between the CPU and GPU. It does a great job.

However, since they have powerful components at the same time being thin.

According to Lenovo, here are the display options for the Lenovo ThinkPad P1.

And here are the display options for the Lenovo ThinkPad X1 Extreme.

As you can see. Both have the same display options. The 4K OLED display is the best out of all the displays.

For example, multimedia editing. The 4K OLED will be the best display followed by the 4K display option. However, the benefits come at a cost. And that’s reduced battery life.

High-resolution and OLED display consumes a lot of power and so significantly reduce battery life. If you are not always plugged in then the 4K option will not be the best choice.

Also, the 4K option is a glossy touchscreen display. It will have an amount of glare and reflections will be cast on the display.

Full HD is also a great display. It has high colour accuracy, brightness and great viewing angles. Although not as great as the 4K display. It is still vivid and better than most competitor laptop displays.

The upside is that you will have a better battery life. Full HD displays consume far less power than higher-resolution displays.

Overall, both Full HD and 4K display options are great. If you want the best display the 4K option it is.

But, if you want better battery life and don’t mind the reduced colour accuracy. The Full HD will serve you well.

The Lenovo P1 and X1 Extreme have the same chiclet keyboard design. That means the keyboard is backlit, spill-resistant and full-size.

A full-size keyboard always has keys that have a decent size. Plus, the keyboard doesn’t feel cramped.

The keyboards have great key travel. However, the P1 has slightly better key travel than the X1 Extreme.

The tactile feedback on both keyboards are great and your fingers can register if keys have been pressed. This results in less typing errors.

A great keyboard for programmers or people who often have long typing sessions.

The touchpads have Windows Precision and gestures. It also has a soft-touch finish which is smooth to the touch.

Finally, Lenovo still maintains the Trackpoint on the keyboard. A sign that it is not going away soon.

Performance is where the Lenovo P1 and X1 Extreme greatly differ.

Let’s talk about the processors first.

The Lenovo P1 is a mobile workstation and it has an Intel Xeon processor means you can take advantage of ECC memory.

ECC memory is a type of computer data storage that can detect and correct most kinds of data errors or corruption.

Super-helpful when your work requires needs protection against data loss.

Also, Intel Xeon processors have an advantage over Intel Core processors when it comes to 3D rendering, modelling, servers, AI, etc. Demanding tasks that are run over long periods.

Intel Xeons can handle such loads well. Because they have a large number of cores and can support several amounts of RAM. However, if you go with the Intel Core processor on the P1.

You won’t be able to enjoy these advantages.

Since both the P1 and X1 Extreme have the same Intel Core options. Performance won’t be different between them.

If the P1 had a better cooling system. It would have been more powerful than the X1 Extreme.

Because it can get rid of heat quickly and thus maintain high clock speeds for long periods. And vice versa for the X1 Extreme. But, since both have the same cooling system we can factor it out.

Overall, unless they have different processors. The computing performance is going to be the same.

Now for the graphics.

The design software on the professional level has a lot of details that consumer graphics cards won’t be able to handle.

The amount of detailed and complex graphics data that has to be processed is more than that of games. Because it is a representation of the real-world.

Quadro graphics cards provide more stability and are optimised to handle such design software. A major reason why Quadro graphic cards and mobile workstations are expensive.

Contrary to popular belief, you can also game on a Quadro graphics card. If they can handle complex graphic data why won’t it be able to handle games?

The X1 Extreme, on the other hand, makes use of the GTX consumer graphics cards. They are generally used for gaming and not meant for design software. They can be used for it but not recommended.

Because of the high probability of it crashing due to instability. It can be equipped with either a GTX 1050 Ti Max-Q or 1650 Max-Q.

Both are capable cards that will be able to handle most games on medium settings.

In terms of computing performance. Both laptops are equal that is if they have the same processor. For example, an Intel Xeon Lenovo P1 is going to be more powerful than an Intel Core i7 X1 Extreme.

For the graphics card. Both have their uses. The Quadro cards dominate in the design software realm. But, are slightly less powerful than their GTX counterparts in gaming.

Whereas, the GTX cards are not recommended for design software but provide better gaming performance.

The Lenovo P1 and X1 Extreme have the same battery capacity – 80WHr. So battery life pretty much going to be the same between them. It’s the display options that are going to affect the battery life.

If you want the best battery life. Better go with the Full HD (1920 x 1080) display. It can last 8-9 hours with medium brightness level under normal use.

The 4K display option cuts it in half. Since it consumes a lot of power. It lasts 4-5 hours under normal use. Fortunately, both have a quick charge feature that can get the battery level to 80 per cent in an hour.

Lenovo ThinkPad P1 vs X1 Extreme – Which One To Get?

Now that we have taken a look at the P1 and X1 Extreme. It is easy to make this choice.

The Lenovo ThinkPad P1 is the better option if you work with design software (CAD, SolidWorks, Rhino 3D, ANSYS, etc.).

You will get better stability and performance since Quadro graphics cards are optimised for such work.

If you don’t work with design software most of the time. Then the Lenovo X1 Extreme will be the better option. A great business laptop for everyday use and occasional gaming. 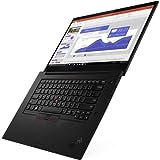