With so many laptops on the market. Choosing between them is becoming increasingly difficult.

In this case, it’s choosing between the HP Envy and HP Spectre x360. Both have their strength and weakness.

But, what is the difference and which one should you choose? HP Envy Vs HP Spectre x360, which is better? Here’s what you need to know. 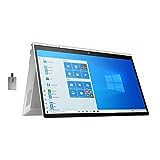 Both have their strength and weakness. But, which offers more bang for the buck. HP Envy Vs HP Spectre x360, which is better? Here’s what you need to know.

Both the HP Spectre and the HP Envy have the premium build quality and design. Both build quality designs are so good. They look far better than a lot of ultrabook laptops.

For one, the HP Spectre x360 has a better design than the HP Envy. It is a class of its own – a charcoal black laptop. It has an all-aluminium unibody with gold accents running along the body.

The edges are polished and have gold accents covering them. The angles look aggressive. Kind of like a high-class item that’s here for business. The HP logo on the display lid also has a gold finish.

The aluminium body is anodized. This increases its resistance to corrosion and wear. So right off the bat, the build quality is top-notch. There is little to no flex even on the display lid.

Unfortunately, it is prone to fingerprints and smudges. The whole convertible laptop has a smooth finish. And if not handled well can easily slip out of your hands.

The HP Spectre x360 weighs 2.8 pounds and is half an inch thick. Hard to believe since it is made from metal. A lightweight and portable device.

So you can expect the same level of protection that’s found in the HP Spectre x360.

The HP Envy has no accents or highlights running through the body. Plus, it doesn’t have aggressive edges like the HP Spectre. It is kind of a muted look.

To be honest, even though it kind of looks muted. It is one beautiful laptop. Now that you think about it. It makes sense why HP calls it Envy.

The HP Envy 17T weighs considerably a lot more and it’s a lot thicker. It’s about 6.7 pounds and almost an inch thick. A large laptop since its display is big. The build quality is still the same.

These two laptops have strong hinges. Normally, the first part of the laptop to suffer damage is the hinge. But, these hinges are bulletproof.

The HP Spectre’s hinge is flexible and rigid. Whiles the HP Envy’s hinge runs from the left to the right of the laptop. It also acts as a lift that raises the keyboard

The display is the window to your laptop’s hardware. Or your laptop’s way of communicating to you. Both laptops have a gorgeous display.

Let’s talk about the display resolution of the HP Spectre and HP Envy.

Plus, 4K displays are brighter and have colour accuracy and gamut than their Full HD counterparts. To know which display resolution is right for you to read this guide.

The HP Spectre is a convertible laptop so the display is touchscreen. For the HP Envy, you can choose between a touchscreen or a non-touchscreen display.

The HP Spectre has its pen much like how the Surface Pro also has its pen. The HP Envy doesn’t have this, unfortunately.

Both displays have great viewing angles and are bright enough to be used outdoors and indoors. The best part? They both have Gorilla Glass protection.

This means your screen is more resistant to scratches and shocks than other laptops. A solid benefit to have especially if you travel a lot.

The downside is that the Gorilla Glass protection causes reflections to easily form like a glossy display.

Overall, both the HP Spectre x360 and HP Envy have bright, sharp and beautiful displays.

Both the HP Envy and HP Spectre can be disassembled. The RAM and storage devices of both laptops are upgradeable.

But, it requires quite an effort to do so. It is not simply unscrewing a few screws and the RAM modules and storage bay are exposed.

For this reason, it is best to consult experts or go through their respective manuals. At best, do it in such a way that it won’t void the warranty.

The HP Spectre comes with Intel Core or AMD Ryzen processors. That means you have the option of choosing between the two. The Intel processors are Intel Core i5 and i7 quad-core processors.

These processors are powerful enough for multitasking, handling certain heavy loads and for everyday PC tasks.

The AMD processors are the Ryzen 5 and 7. The performance of these processors is better than of the Intel Core processors.

The other models either have an Intel Core i5 or i7 processor. So the level of performance is the same as that of the HP Spectre x360.

When it comes to RAM. Both are available in 8GB and 16GB. If you are a heavy user that is open to a lot of applications, run demanding programs etc. then 16GB will be the best for you. But, for everyday tasks 8GB is sufficient.

The HP Envy 17T is the only one that makes use of SSDs and HDDs at the same time. This gives it a lot of storage capacity at the same time the benefits of an SSD. A win-win situation.

Intel HD Graphics, NVIDIA MX150 and MX250 are the graphics card that can be found in the HP Envy and HP Spectre x360.

The Intel HD Graphics is integrated and so for gaming. You will get low FPS. AAA titles and demanding games will be unplayable.

The NVIDIA MX150 and MX250 put up a better fight. You won’t get stellar FPS on AAA titles and demanding games.

But, casual games will fair pretty well. The MX250 is more powerful than the MX150 and has higher clock speeds. And so it will provide better gaming performance.

Mind you, these are not gaming laptops. Although they can handle casual games well. For AAA title games you have to reduce the settings all the way to low.

Overall, both laptops are powerful ultrabooks and can handle a lot of multitasking and heavy tasks to an extent. For everyday PC tasks, they are overkill.

The HP Spectre x360 has a big battery – 79.2 WHr. Combined with its low-power processor you get 9-10 hours of battery life under consistent use.

The 4K model has less battery life since it drains a lot of power. But, it is still above average. It can last 8-9 hours under consistent use.

The HP Envy 13 1080p non-touch has impressive battery life. You are looking at 9-10 hours under consistent use.

But, everything goes downhill with the HP Envy 4K model. The battery life lasts 4-5 hours on average. So if you want great battery life is either you go with the HP Spectre x360 or the 1080p HP Envy.

The battery life of the HP Envy 17T is also similar to that of the 4K HP Envy model. It’s able to last 4-5 hours under normal use.

The HP Spectre’s keyboard layout is properly done. The keys are well-spaced and easy to type on. The tactile feedback of the keys is pleasant overall.

The 13-inch model doesn’t have a Numpad. But, the 15-inch model does. Both have backlit keyboards with two levels of brightness. And can also be turned off.

The trackpad is large and accurate. It can register clicks and gestures well. A smooth trackpad overall that feels good on your fingers.

The HP Envy also has a respectable keyboard. Keys are well-spaced with a decent amount of travel. It is also a backlit chiclet keyboard.

The trackpad also has Windows Precision drivers that register gestures and increase the overall accuracy of the trackpad.

Both laptops have equally good keyboards and trackpads.

It seems the HP Envy and HP Spectre are pretty much equal. Their build quality, design and performance are great. Although the HP Spectre looks much more premium because of the gold accents. But, there is another major difference between the two and that is the ports.

The HP Spectre x360 has more ports than the HP Envy. Plus, its USB Type-C supports Thunderbolt 3.

This means that you can take advantage of superfast file transfer speeds, and connect it to high-resolution external monitors or an external GPU (which allows you to play AAA title games on high FPS).

The HP Envy 17T also has a lot of ports. But, it doesn’t have a Thunderbolt 3 port.

Moreover, both the HP Spectre x360 and HP Envy are available at similar price points. So it kind of makes it obvious which one is the clear winner.

So unless a Thunderbolt 3 port is included the HP Spectre x360 is a better choice.

The HP Spectre also has a better battery life even for the 4K model.

Overall, the HP Spectre x360 is the better option. If you prefer a 2-in-1 laptop with a Thunderbolt 3 port. But, if you prefer a normal laptop then HP Envy it is.

Uncomfortable and Heavy To Use In Tablet Mode

Where To Get It

Understanding Windows Registry, What Does Regedit Do?