In this article, we are going to compare the Dell G3 and Dell G5.

Both are quite popular gaming laptops and offer great performance. Here’s everything you need to know about Dell G3 vs G5. 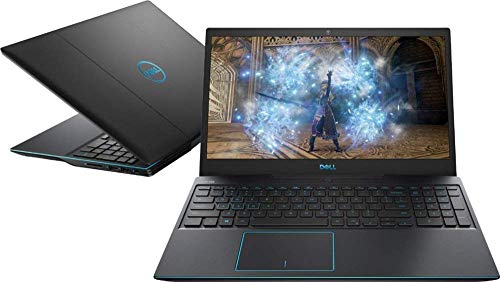 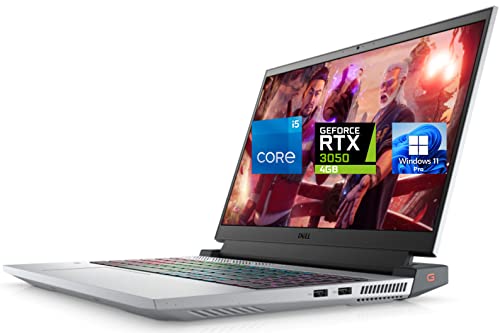 For the storage options, both allow you to configure it up to 512GB SSD and 1TB HDD storage. For the RAM, the maximum both gaming laptops can handle is 32GB (16GB for each slot).

Dell revamped the design of both gaming laptops. They look so much better than the previous models. And have a modern feel to their design.

The Dell G3 looks similar to the HP Pavilion. It’s more of like a black and blue HP Pavilion. The display curves at the bottom-right and bottom-left.

And this time it doesn’t have two hinges. But, one strong hinge. The Dell G5 has a blue Dell logo on the centre of the display.

The gaming laptop also has blue accents running around the edges of the laptop. And the laptop pads that the Dell G3 sits on.

The Dell G5 comes in one colour – matte black – and it is entirely made from plastic. This is to be expected since it is a budget gaming laptop.

The display lid and keyboard have quite a bit of flex to it. But, not so much to be alarmed. The Dell G3 is not exactly a thin and light gaming laptop.

Aside from the Thunderbolt 3 which it doesn’t have. It has a good port selection.

Overall, the Dell G3 is a simple and decent looking laptop. Dell did not go overboard with the gamer design. If you prefer a cleaner design, then the previous model will suit your tastes.

The Dell G5, on the other hand, has no curved edges. It is a rectangle looking laptop with a few curved edges. Plus, it has a more muted look than the Dell G3.

It has blue accents but not the type running along the body of the laptop. It’s more of a subtle kind of accent.

The I/O labelling and logo found on the front display are blue. The Dell logo on the display lid is also blue. Looking at the laptop at certain angles makes it have a silver or green colour.

There are grills that run along the entire edges of the laptop. This gives it a more aggressive look. The

Dell G5 also employs the single hinge design at the centre. There are two colours available – black and white. The white, though, is for Dell G5 Special Edition (SE).

For the build quality, the Dell G5 is made from both plastic and magnesium. The keyboard deck is magnesium whilst the rest of the laptop is plastic.

As you guessed correctly, there is some flex on the display lid but within reasonable limits. The keyboard deck has almost no flex.

Dell trimmed down the weight and thickness of this model. But not enough to be called thin and light. The Dell G5 weighs 5.6 lbs (2.6 kg) and it’s an inch thick.

You can still carry this around, however, you will feel the weight.

On a side note, the Thunderbolt port is only found on models that have RTX or upwards. Most of the ports are found on the back.

Just like the Dell G3, the Dell G5 is a simple looking laptop. However, it is cleaner and has a more muted design.

Opening the Dell G3 is easy to do. Remove a few of the screws. And you have access to the internal components.

From there you can upgrade the WLAN card, HDD, SSD and RAM. The RAM can take up to 16GB or each slot amounting to a maximum of 32GB RAM.

The same is for the Dell G5. However, you need a flat edge to loosen the bottom cover. Once inside, you can proceed to upgrade the RAM, HDD, M.2 SSD and WLAN card.

Just like the Dell G3, the RAM slots can take up to 16GB each. One more thing. The Dell G5 Special Edition doesn’t have an HDD bay. Instead, it has been occupied by its 90WHr battery.

Gaming laptops run hot. But, the question is which one runs hotter? In this case, it is between the Dell G3 and Dell G5.

The Dell G3 does not have vents on the side. But at the back and underside. Inside the laptop, we have two fans and two heat pipes that are shared by the CPU and GPU.

With such few heat pipes, the cooling system surprisingly doesn’t get hot (90 degrees plus).

The only time it reaches those temperatures is when it is subject to loads heavier than gaming for long periods for example stress tests.

For gaming, it sits between 70 to 80 degrees Celsius which is very good.

And the best part? It doesn’t thermal throttle even when it’s above 90 degrees Celsius. It is able to sustain Turbo speeds for long periods without the risk of throttling.

The only downside is that the fans get loud since it has to work extra hard. Overall, the thermals do a great job of keeping the system cool. So you won’t have any problems there

Undervolting and applying thermal paste will give you the best temperatures and performance.

The Dell G5 is a toasty gaming laptop. Even with the two fans and four heat pipes. The gaming laptops run at high temperatures.

When it comes to the vents. There two behind, two at the sides and two on the bottom. The vents might be one of the culprits.

Because the openings are not large enough to let a sufficient amount of hot air to escape.

The gaming laptop thermal throttles like crazy. Undervolting and applying thermal paste is a must. This reduces the temperature and stops performance drops.

Throwing in a cooling fan in addition to undervolting and repasting will do wonders.

For the best results, undervolting and repasting will reduce high temperatures, increase performance and increase the lifespan of the gaming laptop.

The Dell G3 is an affordable laptop. And manufacturers either compromise on the build quality or display. In this case, it is the display.

The Dell G3’s display sucks. It has average colour accuracy and so colours look washed out. The bezels are thick.

The display also isn’t bright and using it in bright sunlight will make the laptop unusable. The only thing that the display gets right is the viewing angles and sharpness.

If you play games and the FPS goes above 60Hz. Screen tearing, stuttering and ghosting will occur.

You might think the display on the Dell G5 might be better. It’s not. It is brighter than the Dell G3 though but compared to the competition it is not. You will still struggle to use it outdoors.

When it comes to colour accuracy, it is average. The colours look washed out and it isn’t vivid. At its price point, Dell should have provided a better display.

The only redeeming things are the viewing angles and sharpness. Also, there are 60Hz and 144Hz refresh rate display options.

Best to go with the highest refresh rate. Because no visual distortions (screen tearing, stuttering and ghosting) will occur when gaming.

Both the Dell G3 and G5 do not offer the best displays.

The only advantage the Dell G5 has over the Dell G3 is that there is a 144Hz refresh rate option. Aside from that, they are pretty much equal.

For a budget laptop, the Dell G3 offers a decent typing experience. The WASD keys have extra blue accents whiles the rest of the keyboard is in blue fonts.

The keyboard isn’t RGB backlit. Instead, it makes use of blue backlighting. The key travel and tactile feedback are good enough.

A Numpad is also included. So keys won’t be full-size. The touchpad has Windows Precision and gestures that makes clicky sounds when you press it.

Overall, the keyboard is average that delivers a decent typing experience.

The Dell G5 wins this round. It has a deeper key travel and more satisfying tactile feedback. A comfortable keyboard that you can easily type on for long periods.

The keyboard is blue backlit. Dell offers an optional four-zone RGB keyboard. For the touchpad, is has blue accents around the edges.

A windows precision and gesture touchpad that has a smooth surface and gets the job done.

All in all, the Dell G5 has a better keyboard than the Dell G3.

The most important part – is performance.

When you compare these maxed out configurations. The Dell G5 beats the Dell G3.

The FPS when playing AAA title games on the highest settings will be higher than that of the Dell G3.

Also, it will fare better on higher-resolution external displays than the Dell G3. This is not to say the Dell G3 isn’t powerful.

You will also be able to play AAA title games on the high settings. But, if you want something futureproof then the Dell G5 is the better choice.

The base models – i5 and GTX 1650 – also provide great gaming performance.

Both Dell G3 and G5 base models are able to handle AAA title games on medium to high settings on Full HD resolution.

If you want performance. Then the Dell G5 will be the better choice. Because some models come with higher-end RTX cards.

For a gaming laptop, both have amazing battery lives. The Dell G3 has a 51WHr battery and it is able to last 6-7 hours on medium brightness and Wi-Fi turned on.

The Dell G5 which has a 60 WHr battery also last the same amount of time.

Aside from their sub-par display. The Dell G3 and G5 are great gaming laptops and will be able to get the job done. Also, choosing between them is easy.

The Dell G3’s greatest strength is its portability, affordability and relative thinness.

On the other hand, the Dell G5 is more powerful and has a Thunderbolt port that you can connect to eGPUs.

To sum it all up. If you prefer an affordable portable gaming laptop. Then the Dell G3 is the better option.

But, if you want performance and a Thunderbolt port. The Dell G5 is the laptop you should get.